This Friday morning March 8, 2013 in Daytona, Harley-Davidson debuted its new Breakout model. For all those present in Daytona, the bike will be displayed at 415 Main Street tonight from 5 to 8 pm in the parking area next to Mikey Luv’s Bar & Grill To learn all about the new motorcycle company executives will be available.

Harley-Davidson describes it as “an urban prowler, a bike ready for a midnight ramble to the roadhouse or a rib joint rendezvous with the crew. Green light? Crack the throttle to deliver a muscular dose of American V-Twin torque and etch the asphalt with a fat rear tire.”

The Breakout is presented as a premium model in its segment with distinctive finishes and specific components not available on other Harley-Davidson bikes. Long and low-slung, the Breakout features a 240mm rear tire visually balanced with thick forks and chopped fenders, while a shaved tank console and a drag handlebar keep the profile low. A Twin Cam 103B™ powertrain and other components are trimmed in gleaming chrome and gloss-black paint.

“With Breakout we got down to motorcycle essentials, which means emphasizing the powertrain and the wheels,” says Harley-Davidson Styling Manager Kirk Rasmussen. “The black and chrome engine visually pops out of the center the bike, and then to maximize the impact of the tires, the fenders are chopped. We wanted a lot of rubber showing to give the Breakout a tough, muscular look.”

The Gasser wheels are new and specific to the Breakout, according to Rasmussen. “We’ve always loved the gasser-style drag racing wheels from the 1960s and ‘70s,” says Rasmussen. “Our wheels are loosely inspired by those classics. Each wheel has 10 half-round spokes. The gloss-black powdercoat is machined away on alternating spokes and the rim edge to expose the aluminum under the paint.” A gloss-black finish is also applied to the new cast aluminum oil tank, as well as fork lowers, brake rotors, muffler shields and the handlebar.

“To lower Breakout’s overall profile, we placed the speedometer on the handlebar riser,” says Rasmussen, “and topped the fuel tank with a black leather strip that covers the seam, and a chrome-plated pod that’s just high enough to conceal necessary wiring and vent lines. The handlebar is a new curved drag bend that which I think feels aggressive when you ride.”

The Softail® chassis mimics the clean lines of a vintage hardtail frame, but utilizes rear suspension control provided by coil-over shock absorbers mounted horizontally and out of sight within the frame rails. The Breakout is available with ABS (Anti-Lock Braking System) and the Harley-Davidson security system as a factory-installed option.

• The Twin Cam 103B™ engine with 103-cid (1690cc), counter-balanced and rigid-mounted within the frame, is rated at 95.5 ft. lbs. of torque at 3000 rpm. The engine is equipped with Electronic Sequential Port Fuel Injection (ESPFI), and Automatic Compression Release (ACR), and is mated to a 6-speed Cruise Drive transmission.

• The powertrain is finished in black powdercoat with chrome covers and gloss-black shields over chrome dual-staggered mufflers.

• Gasser-style 10-spoke cast aluminum wheels are finished in gloss-black powdercoat with machined highlights; 8 by 18-inch rear and 3.5 by 21-inch front.

• Front and rear fenders are chopped. The front fender location and bracket are specific to the Breakout. The rear fender is shaped and positioned to fit close to the 240mm tire. One-piece forged aluminum rear fender supports are highly polished.

• A five-gallon fuel tank is topped with a black molded-leather strip and a low-profile chrome cover. 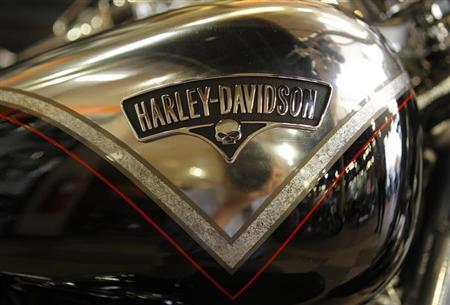 • The two-piece seat features a passenger pillion that may be removed without tools for solo riding and to fully expose the rear fender. Laden seat height is 24.7 inches.

• An all-new wide drag-style handlebar is finished in gloss black. The speedometer is mounted on the chrome pull-back handlebar riser.

• The glass-filled fuel tank medallions and graphics are exclusive to the Breakout.